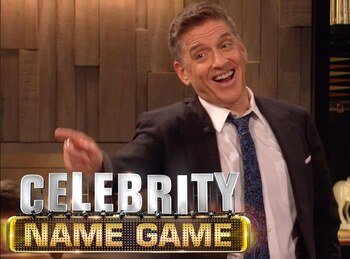 "This time, I will be the cluegiver!"
Advertisement:

Syndicated Game Show that premiered in September 2014 as another entry into the classic genre of "celebrities give clues, civilians give answers" shows. In the first round, a celebrity guest has 30 seconds to communicate up to 10 names of celebrities, characters, or other entities consisting of people, from a category to one of two pairs of contestants, at $100 a piece. In the second round, the celebrities switch and they double the money. The third round is played on the buzzer with Craig reading off clues towards a subject (a la the "Fame Game" rounds on Sale of the Century); the values start at $100, but increase after every name, and getting an answer wrong automatically gives the money to the other team. The first team to $3,000 wins the game and plays a Bonus Round for $20,000. For cluegivers, the traditional "don't say the word or parts of the word" rule applies, but rhyming is not allowed either.

Serving as the first game show produced by Courteney and David's joint production company (better known for the ABC and TBS sitcom Cougar Town), it was originally pitched for CBS as a primetime series (which is how Craig Ferguson got involved). They decided to go down the syndicated route instead, with its distributors (Fremantle and Debnar-Mercury) promoting it to stations as a complement to Steve Harvey's Family Feud.

Season 2 made some changes to the formula; the first round uses letter categories only, and the final round occasionally features different types of puzzles (such as guessing a celebrity based on a Twitter post, or guessing the two celebrities in a fused image). In December 2016, it was revealed that the show would be cancelled after its third season. As of Feb. 9, 2018, Buzzr airs an hour of this show every Friday. Network Ten picked up an Australian version in 2019.

Not to be confused with the bonus round of Hollywood Game Night, which, ironically, plays almost just like this show.