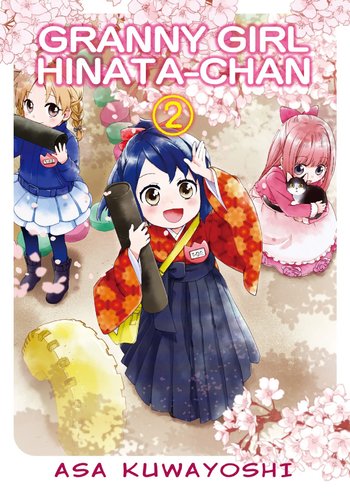 The springtime of youth, once more.
Advertisement:

Hinata isn't like most six year-olds. Where most kids might enjoy milk or juice for lunch, she enjoys sitting on a veranda with a mug of tea and fresh mint, her artwork features the Ukiyo-e style rather than crayons or fingerpaints, her speech and mannerisms are those of an old woman, and when her kindergarten teacher becomes sick she brings a home remedy made with daikon radish to school the next day.

Hinata isn't like most six year-olds. She is, in fact, an eighty-eight year-old grandmother who died and has been reincarnated while retaining the memories of her prior life.

This is the story of Granny Girl Hinata-chan (Roujoteki Shoujo Hinata-chan) by Asa Kuwayoshi, a Slice of Life story about a kindergartener with the memories and personality of an old woman. The manga began its run in Monthly Comic Zenon in December 2014, and is still ongoing.

The manga has been licensed for American release, starting in early 2020.