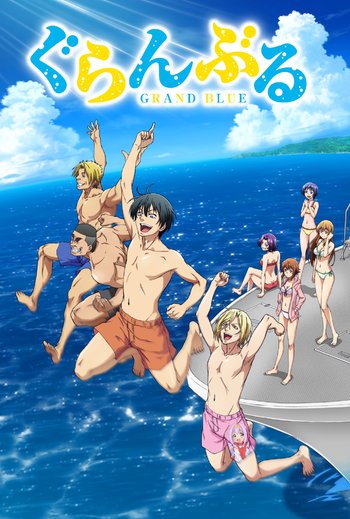 This is a diving manga.* Left to right: Ryuujirou Kotobuki, Shinji Tokita, Iori Kitahara, Kouhei Imamura, Azusa Hamoka, Chisa Kotegawa, Aina Yoshiwara, Nanaka Kotegawa
Iori: Well, How am I supposed to dive if I can't even swim?
Kotobuki: Whatever. That kinda thing will just work itself out.
Iori: I don't think it's that simple...
Kotobuki: You won't get anywhere if you only try things you can already do. What matters is whether or not you're interested in something.
— Chapter 1
Advertisement:

Iori Kitahara starts his new life as a college student at Izu in Shizuoka Prefecture, revisiting the town after ten years; in the meantime, he stays with his uncle Toshio Kotegawa and his two beautiful daughters, Chisa and Nanaka, at their family-run diving goods store "Grand Blue".

Unfortunately, he discovers that life at the seaside isn't as great as it's cracked up to be when he gets shanghaied into joining "Peek-a-Boo", an inter-collegiate scuba diving club whose members are more interested in drinking and being naked than actually diving, which so happens to use Grand Blue as their base of operations. Alongside his fellow mechanical engineering freshmen, diving-obsessed Chisa and hardcore otaku sis-con Kouhei Imamura, Iori might just survive this new insanity.

Grand Blue (ぐらんぶる) is a monthly Seinen Manga written by Kenji Inoue (creator of the Baka and Test: Summon the Beasts Light Novels) and illustrated by Kimitake Yoshioka (of the Amagi Brilliant Park Manga fame). What sets it apart from most Slice of Life stories is its cast and setting: college is very different from high school, and topics that wouldn't usually show up in the latter like the consumption of alcohol, sex and the quest to lose one's virginity are rampant. Despite the narrative's potential for raunchiness, Grand Blue is light-hearted and tells an always hilarious, yet moving story of a young man's journey into adulthood.

The series got picked up for English release by Kodansha USA, under the title Grand Blue Dreaming. It also got an Animated Adaptation, airing in the Summer 2018 Anime season, while a live-action film adaptation was released in August 2020.

Has nothing to do with Granblue Fantasy, especially not to be confused with the said game's spin-off Grand Blues!.