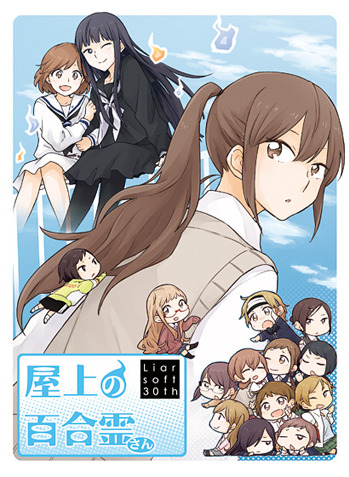 "Go steady go! It's up to you! Go cheer up, go! I've decided to go!"
"Freshman and Senior.
Friendship? Love?
Teacher and Student.
An Unlikely Romance.
Together for Life."
— The opening, discussing some of the couples
Advertisement:

One day, antisocial second-year student Yuna Toomi is having lunch on the roof by herself as usual, when she finds herself encountering two students in old-fashioned uniforms she's never seen before. To her shock, she discovers that these two girls - the Yamato Nadeshiko-esque Sachi and bubbly Megumi - are actually ghosts, having died at this school 80 and 30 years ago respectively. The two are just as shocked - normally they are invisible to living humans, and Yuna is the first person they have encountered who can actually see them. Very quickly, Sachi takes advantage of the opportunity to present Yuna with a request.

You see, both Sachi and Megumi are a couple, and both have the highest respect for the love between girls. With nothing much better to do, they have spent most of their time as ghosts watching over the students of their all-girls high school, cheering on from the sidelines any girls who also feel love for another girl in her heart. Thus their suggestion: they tell Yuna about which potential couples are out there, and then Yuna will actually do everything she can to help them get together that Sachi and Megumi can't. But their quest isn't entirely selfless, either: the reason why Sachi and Megumi haven't moved on yet is that they wish to be truly united in the most intimate way possible... but they don't really know how, and their hope is that by joining these couples together and creating a 'yuritopia,' they'll learn from the other girls and figure it out.

Yuna, who up until now had considered herself a perfectly ordinary girl whose impression of lesbians could be summed up as 'I guess people like that exist too, then,' reluctantly finds herself drawn in as the school's resident yuri cupid.

Kindred Spirits on the Roof (Okujou no Yurirei-san) is a Yuri Visual Novel first released in Japan on February 8, 2012, and given an official English localization and Steam release by Mangagamer on February 12, 2016. The English version sold by both Mangagamer and by Steam has none of the original content removed or altered. It spun off into an official sequel manga with two volumes and four Drama CDs.

Much later Liarsoft announced Kindred Spirits on the Roof: Full Chorus, an Updated Re Release of the game, with full voice acting, new, updated CG, and expansions to the various scenarios, which would release in January 2018. In March 2018 it was announced the remake would be getting an English release in 2018 by Mangagamer.

Kindred Spirits on the Roof provides examples of the following: