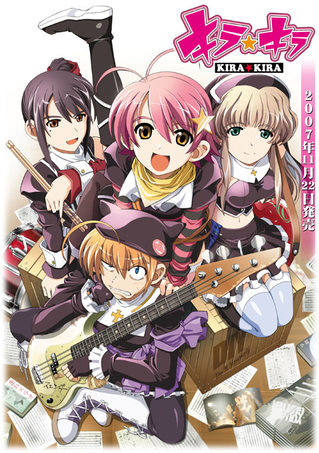 Ero Visual Novel produced by the group OverDrive in 2007, which was licensed by MangaGamer and put out in English in 2009.

Shikanosuke is a twelfth-grade student at a Christian high school, and right now his life kind of sucks. He had to quit the tennis club due to health problems, and he was just dumped by his girlfriend. Right now all that's really going on is his work at a restaurant and his average school days. At the start of the story, though, his life begins to change when a new girl starts to work with him. Her name is Kirari, and she's from the same school as him. The two of them make friends when Shikanosuke is assigned to teach Kirari the ropes, and one night after Shikanosuke tries to settle a fight between members of a visiting band and a couple of drunk thugs, the two receive tickets to said band's upcoming concert as an apology for the trouble. After some debate, the pair head to the concert. Kirari falls in love with the energy, and Shikanosuke—who could never understand what was so special about rock or bands—is entranced by the band's charisma.

At the same time, the club Shikanosuke joined after he quit playing tennis—the second literary club—is set to be terminated because it has too few members. Kirari, who also happens to be part of the club, gets him to come to a meeting discussing what they should do at this year's cultural festival, which will be their last. Kirari's suggestion? They should form a punk rock band and perform like the light music club does!

And so, Shikanosuke, Kirari, and two other girls—Shinakosuke's childhood friend Chie and Kirari's best friend Sarina—decide that they may as well, and are slowly drawn into the world of rock as they become more and more serious about their new hobby.

Kira☆Kira is a Slice of Life comedy about school, love, life, and The Power of Rock. It doesn't take itself overly seriously, and is notable for its extremely high-quality art, fun storylines, and use of rock-inspired music for all of its BGMs. Compare and contrast K-On! and Beck. It has absolutely nothing to do with the serial killer, the Macross Frontier meme, the Gundam pilot, the YA novel by Cynthia Kadohata, or the Danganronpa spin-off manga Killer Killer.

The game has a fandisc called Kira☆Kira: Curtain Call which follows a new group of characters. It is also available in English. Clean versions of both the fandisc and the original game were released for the iPhone and iPod Touch. Has an all-ages PlayStation 2 version as well.

Kira☆Kira contains the examples of the following tropes: