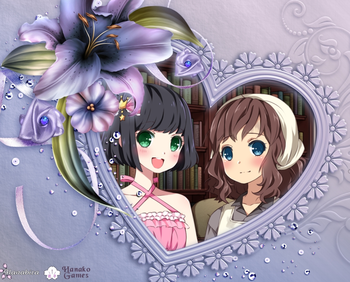 The Little Princess and the Scullery Maid
Advertisement:

A Little Lily Princess is a retelling of the classic novel A Little Princess in visual novel form with a Yuri Genre twist. It was released for PC in May 2016 by indie developer Hanako Games under the label Hanabira (used for works not originally written by Hanako Games). Ported to consoles in 2021.

The game puts the player in the shoes of Sara Crewe, a girl who is clever, kind, has an amazing imagination, and loves to tell stories. Born in British India, Sara is sent by her beloved Papa to be educated in a refined Boarding School for Ladies in London. There she meets the headmistress Miss Minchin, the star student Lavinia and her best friend Jessie, the somewhat slow Ermengarde, the young and spoiled Lottie, her personal maid Mariette, and the Scullery Maid Becky. Sara will start forging relationships with them: friendships, rivalries, and even maybe love.

But fate is a cruel mistress, and soon unexpected events will turn little Sara's life upside down. What will happen to her, and will the bonds that she created with the other girls endure the hardships, or be shattered?

It's up to you to decide.