Western Animation / The Mitchells vs. the Machines 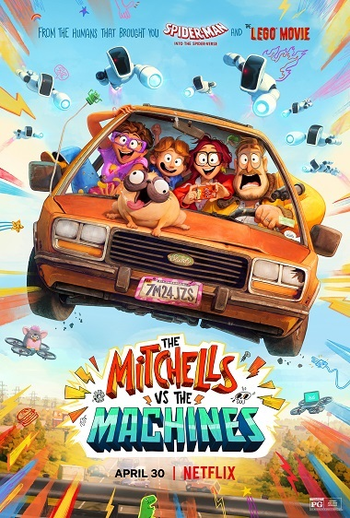 Ah yes, robot apocalypses... the best time for family bonding, or so these guys say. note Left to right: Linda, Mochi, Aaron, Katie, and Rick.
"We're the Mitchells, the only people who can save the world. ...I'm super-sorry, everyone."
— Katie Mitchell
Advertisement:

The Mitchells vs. the Machines, originally titled Connectednote Technically, The Mitchells vs. The Machines was its original title, then it was switched to Connected before going back to its original title., is a science-fiction CGI film from Sony Pictures Animation, directed by Mike Rianda (Gravity Falls) and produced by Phil Lord & Chris Miller (The LEGO Movie and fellow SPA films Spider-Man: Into the Spider-Verse and Cloudy with a Chance of Meatballs).

Katie Mitchell, a creative outsider, is off to the film school of her dreams and can't wait to join "her people"... but her dad Rick decides this would be the perfect opportunity for a family road trip to drive her to school that would give him time to reconnect with his estranged daughter. Unfortunately for them, a rogue AI stages a worldwide machine uprising, turning everything upside-down for all of civilization. Maybe, just maybe, they can pull their Dysfunctional Family together... and figure out how to save the Earth along the way.

The film was released on Netflix on April 30th, 2021, and on Digital, Blu-Ray and DVD on December 14th, 2021, alongside a Director's Cut of the film (titled "Katie’s Extended Cinematic Bonanza Cut!").

The Mitchells vs. the Machines provides examples of:

open/close all folders
#-D
E-H
I-R
S-Z
♫ Now everybody watchin' what I do
Come walk in my shoes
And see the way I'm livin' if you really want to
Got my mind on my money and I'm not goin' away
So keep on gettin' your paper and keep on climbing
Look in the mirror and keep on shining
'Til the game ends, 'til the clock stops
We gonna post up on the top spot
So live your life ♫
Feedback

Eric and Deborah insist that they're humans, despite very obviously being robots.

Eric and Deborah insist that they're humans, despite very obviously being robots.