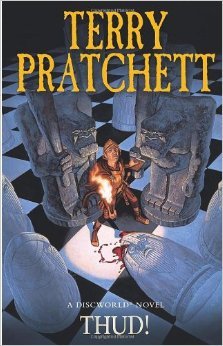 The 34th Discworld novel and the seventh in the Watch theme.

"Thud" is the Discworld equivalent of chess, with pieces portraying dwarfs on one side and trolls on the other, at the legendary Battle of Koom Valley. The anniversary of the Battle is just around the corner. Since this was a very important date for both the Dwarfs and the Trolls (No one knows who won, who started it or what the heck actually happened, but everyone cries "Remember Koom Valley!" when they want to get the blood up), tensions are running high in Ankh-Morpork. Commander Vimes of the City Watch is not happy about this, nor about Salacia Von Humpeding, the new vampire recruit, nor about the Patrician's clerks poking about the Watch. Nevertheless, he takes all this in stride, and still manages to get home every day at six to read his son a bedtime story.

The situation only becomes worse when Hamcrusher, a grag (a sort of dwarven preacher and lorekeeper, a "deep-down" dwarf fundamentalist) who vehemently speaks out against trolls, is found murdered beside a troll club. Vimes visits the scene, butting heads with Hamcrusher's right-hand dwarf Ardent and a nervous servant named Helmclever, and finding an expansive tunnel system filled with doorways stretching underneath the streets of Ankh-Morpork. While there, he catches his hand on one of the sealed doorways, and it begins to itch...

Preceded by Going Postal, followed by Making Money. Preceded in the Watch series by Night Watch, followed by Snuff.