To Know Him, I Must Become Him 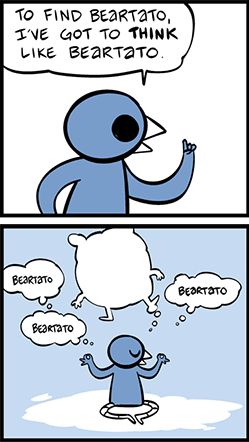 The hero decides that the only way to defeat the enemy is to understand how the enemy thinks in the most intimate and experiential way possible: to get inside the enemy's mind either literally or figuratively. The hero may accomplish this with the aid of drugs, Psychic Powers, or some other strategy. May result in a "Not So Different" Remark, or even a personal epiphany (or Epiphany Therapy if done badly). There is also the danger of Becoming the Mask when attempting this with a practical approach!

Compare Consulting a Convicted Killer, where the law-abiding protagonists ask a dangerous criminal with a background very similar to the person on the loose to try to suss out how the criminal mind works, and Mirror Character, for characters who know each other because they are already very similar. Contrast That's What I Would Do. Compare and contrast Copied the Morals, Too, where a copy made of a heroic character (usually for diabolical purposes) turns out to have the heroic character's moral code as well as their appearance.