Some of My Best Friends Are X 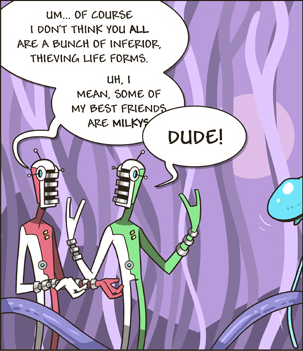 Alice accuses Bob of discriminating against/being prejudiced towards group X, and Bob denies it, by pointing out "Some of my best friends are X's". Usually played for Hypocritical Humor, as if having friends of a particular racial/ethnic group makes them not racist. Said friends are rarely ever present to speak for themselves and, therefore, can neither defend nor criticize whatever it was that earned Bob the accusation of prejudice. Besides, being a member of group X yourself will not necessarily preclude your being prejudiced against group X.

Note though that this trope depends on its use as a defense against an accusation. If Bob simply says 'I have many friends who are X', but is not using it as a defense, then it may not be this trope. It may just be that he's saying so because another person says they've never seen many people of that group, so Bob saying that he has friends in that group is just meant to point out he knows some. The use of this phrase as a defense against bigotry has been lampooned so many times that un-ironically using it in Real Life is usually construed as ipso facto evidence of racism.

Often a response to Mistaken for Racist. Related to You Are a Credit to Your Race and Bigotry Exception, and often accompanied by Not That There's Anything Wrong with That. It may also be used to (dubiously) claim N-Word Privileges for using a slur that's considered derogatory when it comes from outsiders.

An Undead Horse Trope that may be depressingly difficult to put down. See the Analysis page for more information.

Note that this is not the same as saying "Some of my best friends are X" in the context of expressing knowledge and familiarity with the group in question. Example: "Yes, I'm familiar with Jewish customs. I have many close Jewish friends".

Alternative Title(s): Some Of My Best Friends