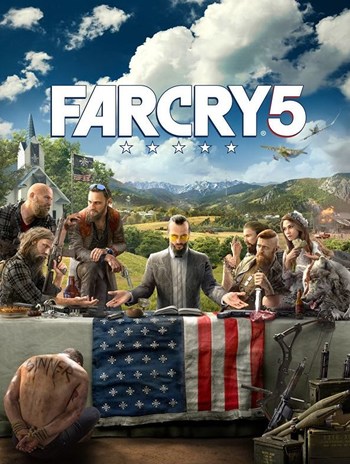 Trust. Pray. Obey.
"Oh, my loving sinner, when the world's on fire,
Don't you want God's bosom to be your pillow?
Tide me over, in the Rock of Ages,
Rock of Ages, cleft for me..."
— "When the World's on Fire" ("Rock of Ages")
Advertisement:

Far Cry 5 is the sixth major installment in the Far Cry franchise, taking place in the fictional county of Hope County, Montana.

The game follows a sheriff’s deputy who is fighting against a religious cult called the Project at Eden’s Gate, led by the charismatic Joseph Seed, who believe the world is ending and are forcing the residents of Hope County to convert to their cause. It was released on March 27th, 2018 for the PlayStation 4, Xbox One, and PC.

As part of the game's promotion, Ubisoft partnered with Asylum Entertainment to produce Far Cry 5: Inside Eden's Gate, a live-action short film that serves as a prequel to the game. The film sees Greg Bryk reprise his role as Joseph Seed from the game.

The game features three DLCs which, following the trend set by Blood Dragon and Primal, change the gameplay and setting significantly (albeit sold as DLC instead of a standalone game):

A direct continuation of the events of the main game, Far Cry: New Dawn, was announced at the 2018 Game Awards. It was released in early 2019.

open/close all folders
Tropes A-F
Tropes G-Z
Hours of Darkness
Lost on Mars
Dead Living Zombies
Amazing Grace,
How sweet the sound,
That saved a wretch like me.
I once was lost,
But now I'm found,
Was blind, but now I see.