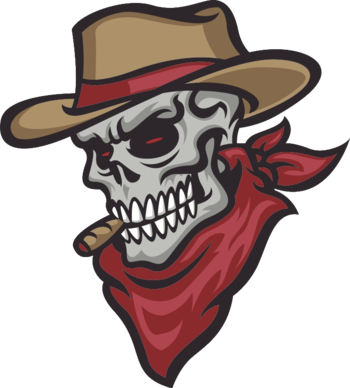 "I am your host, the man they call Ghost."note "I'm a fat fruity bastard, and I'm a nice guy!"
"I am not a racist, I am a melting pot of friendship, and I want you to amplify that all over the internets."
Advertisement:

Ghost is actually a Texan pundit who broadcasted True Capitalist Radio on blogtalkradio.com and ghost.report. He is an ardent capitalist (at least he calls himself one on every possible occasion; True Materialist Radio might be a more appropriate name for the program), and his show goes through the usual topics, starting with the markets, then on to coverage of then-ongoing political headlines. And like all good political talk shows, he also frequently takes calls from listeners.

Herein lies the problem (at least for him, anyway) and the general appeal of the show. Listeners have noticed that he has a short temper when it comes to certain topics (check that, he has a short temper towards a lot of topics), and as such, he is very easy to troll. Much to his dismay, this makes the show start off serious but then quickly go off course more and more towards the end of the show, where the Radio Graffiti segment (rapid-fire calls with no real topic) pretty much turns into a punching match between him and the people who persistently try to test his patience (often successfully). This has lead to a large rogues gallery of trolls and characters that call him up and interact with him in various entertaining ways. Also not to be missed is the Twitter Shout-Outs, where Ghost reads off a list of Twitter users who have retweeted his broadcast that day, with trolls feeding him usernames that range from hilariously obscene to subtly derogatory toward Ghost, often with a delayed reaction of fury or disgust when Ghost realizes what he just read out loud.

Though, when he's not raging, Ghost is a relatively good pundit (if you, er, share his views); he knows where the money is, and he knows how his listeners can get in the action themselves (unless they're doing it with welfare checks, of course).

True Capitalist Radio ended on November 14, 2018 and Ghost is now hosting his new YouTube broadcast, The Ghost Show, which can be found from his YouTube channel

. Newer episodes of his old show can be found from online at ghost.report

, and older ones can still be found from Ghost's page on BlogTalkRadio

All the noteworthy Radio Graffiti and Twitter Shout-Out segments are available on YouTube, typically trimmed of the less funny calls; DarkRazorZ's channel

features episodes from 2008 all the way to the show's initial cancellation in 2012, Elfoxoloco's channel

features episodes from the show's return in 2016 up to Ghost's hiatus in mid-2017, and Lightning Note

channels feature episodes following Ghost's return in late 2017. If you're an actual capitalist looking to learn something from him, you might want to listen to the full episodes on blogtalkradio's archives

. Originally, to keep up to date on what Ghost was up to, people would follow him on Twitter. Prior to him being suspended, his first twitter was @ghostpolitics. Following its suspension, he tweeted from @gh0stp0litics, before that too was suspended. Prior to June 2017, his twitter was @politicsghost, however he was suspended again in June of 2017 for unknown reasons. His social media of choice for a while was the Twitter alternative gab.ai, where you could find him under @Politicsghost, however following some drama and the doxing of a former Inner Circle member, Ghost has been banned from the site and his old account name has been occupied by a troll. Ghost utilized the YouTube channel GhostPolitics

until he was prevented from streaming on YouTube. He currently streams on Vaughn Live at Ghost

As mentioned above, the show has seen a fair share of troll dramas in its history, some of which are mentioned in this page. Since most of the Twitter and Youtube accounts relating to these incidents have since been deleted, it is recommended that you check out True Capitalist

Wiki if you want more information on these behind-the-scenes incidents.

This radio show provides examples of:

You've been listening to True Capitalist Radio. The thoughts, views, ideas, comments, and opinions of the host of the show are...absolutely his.