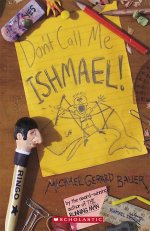 Poor Ringo.
"And you've never heard of Ishmael Leseur's Syndrome consider yourself lucky. It's been known to destroy the 'normal behaviour' gene and expose a person's innermost idiot to the world."
— Ishmael Leseur (the world's one and only sufferer)
Advertisement:

Don't Call Me Ishmael! is a light-hearted trilogy of Young Adult novels written by Michael Gerard Bauer and centering around cheery loser Ishmael Leseur and his friends, in an Australian all-boys school. Notable largely for an infectious enthusiasm, which suggests that Bauer enjoyed the novel as much as his characters, and for being highly quotable, to the extent that the series named a trope before receiving its own page on the wiki.

Characters with major roles in all works of the series include:

Don't Call Me Ishmael! provides examples of the following tropes: