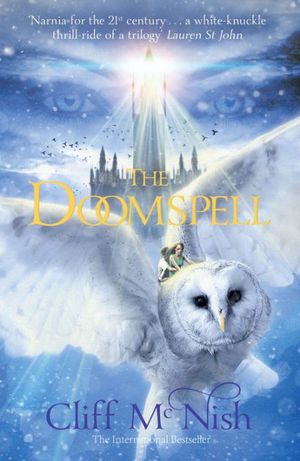 Rachel and Eric have been having dreams. Weird dreams, and the same ones. Their mother doesn't believe them.
Advertisement:

Next thing you know, they're being dragged through a weird eye-shaped door in their basement into another world. While freefalling through the air, Rachel realizes - she has magic! After playing around with it a bit, she flies through the air to catch Eric, who for some reason doesn't have magic.

They land on a planet covered in grey snow, and are collected by the Witch Dragwena and the stunted five-hundred-year-old man Morpeth. Turns out that all children on Earth have magic, thousands of children have been kidnapped and enslaved by the Witch, and Rachel is particularly strong and is the child-hope as predicted in a song. She could either set the world of Ithrea free - or become a Witch.

In the second book, The Scent of Magic, Rachel, Eric and Morpeth are living happily on Earth - although Rachel's spells are restless. Dragwena's sisters from the Witch planet of Ool come to Earth to avenge her, and raise an Army of Tyke Bombs to fight Rachel. Turns out, however, that there's a boy with magic stronger than even Rachel's - and he's a toddler called Yemi who loves butterflies.

The third and final book of the trilogy, The Wizard's Promise, takes the premise of the last two books and turns it up to eleven. The magic of every child on Earth has been set free, although this leads to a whole new batch of societal problems. The High Witches have been replaced by even more beastly and bloodthirsty beings called Griddas, who kidnap Yemi and force Rachel and Eric to come to Ool. Cue interplanetary travel (between no less than three planets) and a level of badass you would not expect.