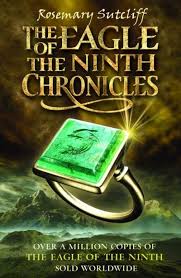 Books 1, 2, and 4, alias "The Roman Britain Trilogy", alias Three Legions.
The Dolphin Ring sequence is a Generational Saga of eight Historical Fiction novels by Rosemary Sutcliff set in Britain from the Roman period to the Norman conquest.
Advertisement:

The eight books of the sequence were published out of chronological order from 1954 to 1997 and have never been marketed as a series. note The Eagle of the Ninth, The Silver Branch, and The Lantern Bearers are often packaged as a trilogy by the Oxford University Press. "Dolphin Ring" is a Fan Nickname derived from the linking device of a signet ring passed down through the Aquila family to their Roman-British, Welsh, and Norse descendants.

Though this page presents the series in chronological order, connections between books are distant (pretty much just the ring), and none require any knowledge of the others. Only The Lantern Bearers and Sword at Sunset share a setting and characters. The series also contains slight connections to the rest of The 'Verse of Sutcliff's historical fiction (e.g., the woes of the Ninth Legion feature in Song for a Dark Queen, Eagle's Egg, The Eagle of the Ninth, and Swallows in the Spring). Four novels of the sequence currently have their own pages, and the remaining four are divided into folders on this page, as their contents are essentially independent.

The Eagle of the Ninth, The Shield Ring, and The Silver Branch were shortlisted for the Carnegie Medal. The Lantern Bearers was the winner for 1959.

The Dolphin Ring provides examples of:

open/close all folders
The Lantern Bearers
450s-70s CE. Aquila deserts from the departing legions and devotes his life to holding off the Saxons from Roman Britain.
Dawn Wind
585-597 CE. Owain, a Briton, becomes a Saxon thrall and is drawn into the affairs of a Saxon family.
Sword Song
890s CE. Bjarni Sigurdson, a Norwegian Viking, is exiled from his British settlement for killing the man who kicked his dog and sells his sword as a mercenary, embroiling himself in the feuds of Viking earls from Dublin to the Orkneys.
Advertisement:
The Shield Ring
1090-1100s CE. Tomboy Frytha and Warrior Poet Bjorn defend the last hidden Norse stronghold against the Normans.