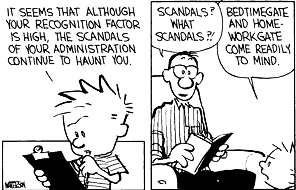 I wonder what my new dad'll look like...
Webb: That must be the biggest scandal since Watergategate.
Mitchell: "Watergategate"? Isn't it just "Watergate"?
Webb: No, that would mean it was just about water. No, it was a scandal or "gate" — add the suffix '-gate', that's what you do with a scandal — involving the Watergate Hotel. So it was called "the Watergate scandal", or "Watergategate".''
— That Mitchell and Webb Look
Advertisement:

Shortly after midnight on June 17, 1972, five men were arrested for breaking into the headquarters of the Democratic National Committee at the Watergate Hotel in Washington, D.C.. The fallout was immediate, widespread, and immense, leading directly to the resignation of Richard Nixon, then-President of the United States, on August 9, 1974.

The event, dubbed "Watergate" after the hotelnote Incidentally, the "gate" in Watergate refers to the literal wooden toll gate

◊ marking the place where the Chesapeake and Ohio Canal empties into the Potomac River. The Hotel overlooks said gate., was the biggest political scandal to hit the United States at the time. As a result virtually every political scandal that has happened since has had the suffix "-gate" applied to its name. Even scandals that aren't political in nature have followed this naming convention.

For Real Life Examples, see The Other Wiki for an in-depth list.