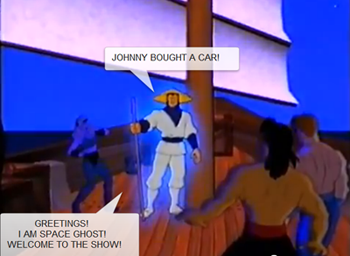 A typical still from a video, complete with references.note The upper annotation is a quote from Mortal Kombat, and the latter obviously refers to Space Ghost Coast to Coast.
Advertisement:

The Annotated Series is a YouTube series that lampoons TV shows and public service announcements, such as Ctrl+Alt+Del: The Animated Series, The Adventures of Super Mario Bros. 3, Captain N: The Game Master, The Super Mario Bros. Super Show!, and Donkey Kong Country via YouTube's annotation feature.

On October 3rd 2009, user CurtDogg uploaded an episode of Ctrl+Alt+Del: The Animated Series and included a link to the video's annotation editor in the style of the channel UnoriginalMaterial,

which had been going for a few months by this time. It caught on and The Annotated Series was born. Under the name beeupyou,

CurtDogg continued to upload the rest of the series before moving onto other video game-related cartoons. However, YouTube eventually discontinued the collaborative annotation feature, forcing the move to the shared channel, TheAnnotatXperiment.

The Annotated Series is presented in a regular episodic format, usually in the original order of the series in question, with a break in the middle or end of each season. Each break is marked by an intermission in which group members annotate something completely unrelated but generally of similar poor quality as the main attractions.

is used for material that is considered too risky copyright-wise for the main channel.

In mid-2014 two strikes were leveled against TheAnnotatXperiment, resulting in a channel move. The new main channel is TheAnnotationStation

while TheAnnotatXperiment will serve (for the time being at least) as an archive for old works. note Sadly, that channel has now been terminated.

In April 2016, Annotation Plus

was formed to train fledgling annotators and finish some series. It was later indefinitely closed, remaining to be decided if it'll remain active in the future.

In October 2014, the annotators started uploading Five Years: The Annotated Anniversary Special! on [TheAnnotationStation], celebrating all of the content covered in the previous five years with a montage of key scenes for participants to annotate anew.

In March 2017, the annotators received a terrible wake-up call when YouTube announced that it will be removing the ability to add or edit annotations by May 2, bringing an end to The Annotated Series and its channel's trademark. It does seem like the crew has some plans for what they'll do for their last month of annotations, as well as after the date that YouTube pulls the plug on annotations... Unfortunately, on September of the same year, Youtube terminated the Annotation Station channel due to numerous copyright claims while TheAnnotatXperiment stayed up. They made an announcement video on that channel saying that while it wasn't the end of them and that many of the videos would be reuploaded on a separate channel, it also lead to the "loss of a fair few of Annotated Riffs" which weren't recorded before the termination of the channel and that they would be lost forever.

As of October 26, the crew has uploaded some of those lost videos onto a channel called Annotation Archive

. On October 31st, they announced that they made an off-site annotation maker to continue the series. On June 8, 2018, The Annotated Series rebooted with the same video used to close out the old annotation series, but with annotations from the new annotation system. The new channel now called just Annotation Station

, officially becoming active over a year since the initial ending of The Annotated Series, hopes to see a long and prosperous future. The new channel's name was later changed to Annoverse. From October 3rd, 2019 to October 9th and later November 27th, 2019, The Annotated Series celebrated its 10th anniversary by re-annotating material from what was saved from TheAnnotatXperiment and TheAnnotationStation channels from Mega Man (Ruby-Spears) to Kirby: Right Back at Ya! note  Not including the intermission videos that were saved from TheAnnotationStation.

Recently, the old annotation tool was thrown out to the public for everyone to use. Join here to annotate whatever is available

Attention: Please do not add links to the annotated videos. The Annotators have asked to avoid linking from other websites, in case potential copyright claimants were to find them. note ...Which is not actually how DRM works, but still.

Stuff Annotated Both By The Annotators And With The Beeupyoumatic1000

Stuff Annotated With The Beeupyoumatic1000

Series That Are Annotated With The Beeupyoumatic1000

Exclusive to Annotation Plus

The Official Drinking Game. Have an ambulance on standby.