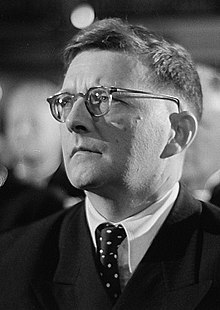 To quote Leonard Bernstein, a true son of Tchaikovsky.
Advertisement:

Dmitri Dmitriyevich Shostakovich (25 September 1906 – 9 August 1975) was a Russian composer of classical music. His style is, on the one hand, well known for its exaggerated, tense emotions often bordering on the grotesque; and on the other hand, for its subtle irony and light wit. Not very surprising, considering that Shostakovich worked in an era when Soviet censors dictated what kind of art is acceptable. He had to learn to be discreet and hide clever musical hints beneath bombastic, "clichéd" music.

His music provides many awesome moments. Most notably, his Symphony No. 5 in D minor moved his audience to tears because it evoked to them vivid images of their oppression under the Soviet dictatorship. Somehow, at the same time, that same dictatorship praised the symphony for being patriotic and pro-communist; the censors never picked up on the subtle musical subversions.

Tropes that apply to him and his works include:

Leonard Bernstein conducts the New York Philharmonic during a tour of Japan in 1979.

Leonard Bernstein conducts the New York Philharmonic during a tour of Japan in 1979.