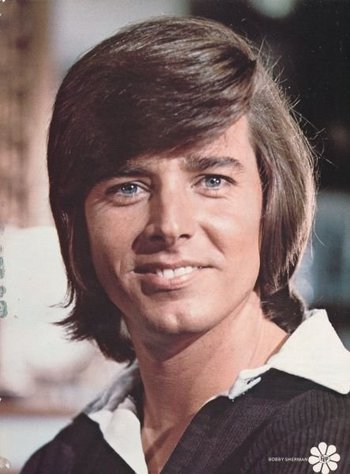 Robert Cabot "Bobby" Sherman Jr. (born July 22, 1943 in Santa Monica, California) is an American singer and actor. He got his start as a house singer on the ABC Variety Show Shindig!, which ran from 1964-1966. In 1968, he landed a starring role on Here Come the Brides as Jeremy Bolt, a role that made him into one of the biggest Teen Idols of the late 1960s and early 1970s. In 1971, he guest starred in the Partridge Family episode "A Knight in Shining Armor" with Wes Stern. The episode served as a Poorly Disguised Pilot for the short-lived sitcom Getting Together, which ran for 14 episodes.
Advertisement:

He released more than 100 songs between 1962 and 1976. His highest charting single was "Little Woman," which peaked at #3 in 1969. He toured extensively, playing sold-out concerts to thousands of screaming fans. The screaming left him with permanent hearing loss.

In 1974, he played a paramedic in the Emergency episode "Fools," which eventually led to him mostly leaving the public eye to become a paramedic and later a police officer. He continued to act into the 1980s and gave his last musical performance in 2001.