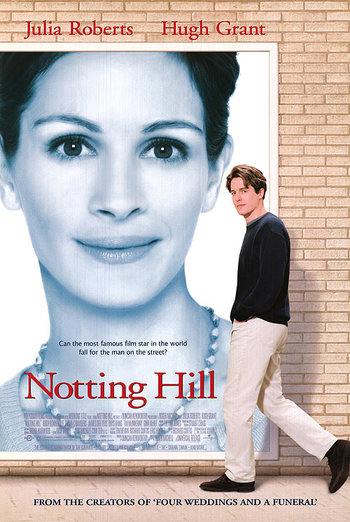 I live in Notting Hill. You live in Beverly Hills. Everyone in the world knows who you are. My mother has trouble remembering my name.
— William
Advertisement:

Anna Scott (Roberts) is a staggeringly successful, internationally famous movie star who meets travel bookstore owner William Thacker (Grant) in the eponymous London neighborhood and begins a somewhat rocky relationship with him. They want to be together, but her mega-stardom is constantly intruding on their happiness. Along the way to love, there’s plenty of quirk and British accents to add a little fun and flavor.

The movie is notable for taking several shots at show business, in particular how the industry treats its female stars.