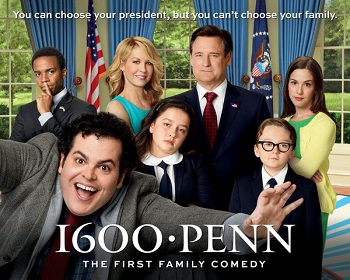 President Dale Gilchrist (Bill Pullman) has a host of family issues to deal with while running the country. His new wife Emily (Jenna Elfman) is trying to become accepted as a member of the family. His oldest son Skip (Josh Gad) is a Lazy Bum who has moved back home after wasting seven years of college partying. Oldest daughter Becca (Martha MacIsaac) is supposed to be the respectable one, but has just become pregnant as the series opens due to the Law of Inverse Fertility. The First Family is rounded out with lesbian teen Marigold (Amara Miller) and preteen genius Xander (Benjamin Stockham). Press secretary Marshall Malloy (Andre Holland) is Becca's former boyfriend while lovable idiot D.B. (Robbie Amell) is her baby daddy, except actually Marshall is the father after all.