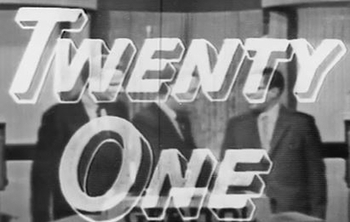 1956-58 NBC Game Show where host Jack Barry asked knowledge questions of two contestants, each of whom was in a Sound Proof Booth and not aware of the other's progress. Question values were worth from 1-11 points, appropriately increasing in difficulty. The object was to be the first player to score 21, but both players had the option to stop the game after two rounds. The winner (first to reach 21, or in the lead, if the game was stopped) received $500 per point in the margin of victory. Every time a game ended in a tie, the contestants played again with the stakes raised by $500 per point.
Advertisement:

By modern standards, the questions were brutally difficult, often with several parts. To add to the pressure, the champion had the option to walk away after each win; if he played again and lost, the new champ's winnings for that game were paid out of his total.

While Twenty-One is well-known for being a rigged game, the debut show wasn't. It was only after the first two contestants kept missing questions that Dan Enright opted to pretty much "script" the proceedings, including giving certain players the answers. One such player, James Snodgrass, sent letters to himself via registered mail which contained the answers to his shows before he played them (in May 1957), which proved very useful later on.

Probably the most pivotal moment came early in the show's run, in late November-early December 1956, when then-champion Herb Stempel faced off against Charles Van Doren. Both were given the answers in advance, and Stempel was specifically told to get a certain question wrong (about the 1955 Academy Award winner for Best Picture; the answer was Marty, one of Stempel's favorite films, but he was told to say On the Waterfront). Unlike what the 1994 movie Quiz Show would have you believe, they actually went on for another tie game before Van Doren won, and the scandal investigations didn't begin until a Dotto standby contestant came forth with the smoking gun in mid-1958.

A revival was attempted in 1982 with Bullseye US host Jim Lange, but didn't sell. In 2000, NBC retooled the game for primetime with Maury Povich as host. All main-game questions here were multiple-choice. Questions worth 6 or fewer points had one correct answer out of three; questions worth 7 to 10 points had one out of four (for 10-point questions, "None of the above" was an option). Questions worth 11 points had two correct answers out of five, and both were required. Each wrong answer gave the player a Strike; three Strikes ended their game. This version ran for just under six months, but paid out big — Rahim Oberholtzer won $1.1 Million, and David Legler topped that by winning $1.75 Million, both American game-show records. Legler's record would stand until Kevin Olmstead won the graduated grand prize on Who Wants to Be a Millionaire? (who would then be passed by Ken Jennings).

Not to be confused with either the film of the same name or Catch 21, GSN's version of Gambit.