Literature / The Wanderings of Wuntvor 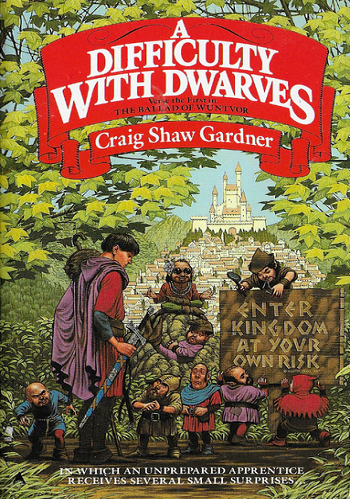 The Wanderings of Wuntvor is the Omnibus name for a trilogy of comedic satire Heroic Fantasy novels written by Craig Shaw Gardner. The individual books are A Difficulty with Dwarves, An Excess of Enchantments, and A Disagreement with Death. Sequel to another trilogy, The Exploits of Ebenezum.
Advertisement:

After saving Vushta from the Netherhells and defeating Guxx Unfufadoo, Wuntvor believed that his master would at last be cured and he could finally begin to learn magic at his side. Instead, Ebenezum's curse spread to infect the entire Greater Vushta Academy of Magic and Sorcery! So, Wuntvor is set out on a dangerous quest to the Eastern Kingdoms of Mother Duck. It will not be easy, as even more trials and tribulations stand before him... not least of which his many allies seeming to fall apart, leaving him to continue on alone.

In addition to tropes from The Exploits of Ebenezum, this series contains examples of: