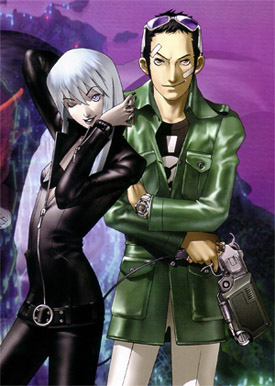 Hardcore hacker hack you!!
—Motto of the Spookies.
Advertisement:

Amami City is a modern Cyberpunk metropolis where every home has a networked computer and the Internet is tightly controlled by the government. When the Algon Software Mega-Corp announces that a new virtual city called Paradigm-X will be hosted on the network, you and your Playful Hacker friends poke into it and discover that something is seriously wrong... as in "there's something that lives in there that will attempt to suck out your soul" wrong. Fortunately, you are saved from the impending de-soulification by a mysterious figure called Kinap, who tells you that you have several souls trapped inside of you, and that if you wish to solve the mystery of Paradigm-X you must experience the last moments of those souls' mortal lives.

The usual Shin Megami Tensei components are here: demon fusion, elemental weaknesses/strengths, conversing with monsters to convince them to join your cause and an incredibly dark storyline. An important part of Devil Summoner is Loyalty. Demons gain Loyalty if you command them to use moves that their personality type prefers (eg: physical, magic, etc.) and lose Loyalty if you tell them to use a move that they hate. A Demon with high Loyalty is more likely to obey you and even make a Diving Save. A Demon with low Loyalty will routinely ignore your commands and may even leave the party. (Yes, it's as annoying as it sounds.) The only Demon that isn't subject to this is the Zoma (default name Zeed), an artificial demon who will always have complete loyalty to you and grows not by traditional fusion, but by "stealing" the stats and abilities of demons that you sacrifice to it.

The original version of Soul Hackers was never released outside of Japan, though a fan translation is in the works from the same people who translated Persona 2: Innocent Sin. However, an enhanced 3DS port was released in Japan in 2012 and North America in 2013, which included full voice acting, updated art, and other extra features.

On February 17, 2022, Atlus released a mysterious website with a countdown set to end on February 21

, followed by a set of bizarre broadcasts on the following days. On February 21, a sequel, Soul Hackers 2 was announced for PC via Steam, PlayStation 4, PlayStation 5, Xbox One and Xbox Series X.