Spoilers for Shin Megami Tensei IV will be left unmarked. You Have Been Warned! 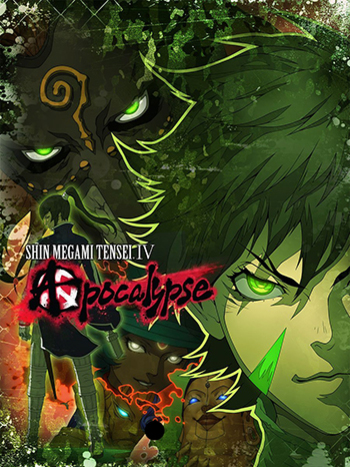 This epic is not sweet.
"No longer human. Not angel, not demon. He is... my puppet."
— Dagda
Advertisement:

The year is 2038, 25 years after a war between gods and men left the world in ruins. In the last days of the war, the city of Tokyo, Japan was covered by a massive stone barrier, becoming a sunless shadow land where people kill each other for what little remains, and angels and demons rule over the surviving humans as apex predators.

You play as a 15 year-old "Hunter" in Tokyo named Nanashi, who soon after the game starts is killed by a demon. Lost in the abyss between this world and the next, Nanashi is approached by a fallen deity named Dagda, who offers to return the young hunter to the land of the living. In return, Nanashi becomes Dagda's "Godslayer", a living weapon with the ability to summon and control other demons. Nanashi must now destroy the forces of Lucifer, Merkabah, and the newly arrived cabal of Old Gods led by Krishna, before their three-way war obliterates what remains of mankind.

Multiple mechanics from Shin Megami Tensei IV have been updated based on player feedback. Support partners can now be selected by the player, level up like demons, and have unique specialties like recovery, attack, and support. Demons now have skill/magic specialties as well: using a skill they specialize in gives bonuses like increased damage or lower MP cost. Multiple skills now have additional affects when used during Smirk status. For example, Light and Dark skills now inflict damage and can be used against bosses, but their instant death effect only activates during Smirk. Furthermore, demon negotiations have also been revamped to be more forgiving.

Lead programmer of Digital Devil Saga, Shin Megami Tensei III: Nocturne and Shin Megami Tensei IV, Satoshi Oyama serves as director, with Masayuki Doi again working as the character designer. The game was released in Japan on February 10, 2016, and on September 20, 2016 in North America. The European release was on December 2, 2016.