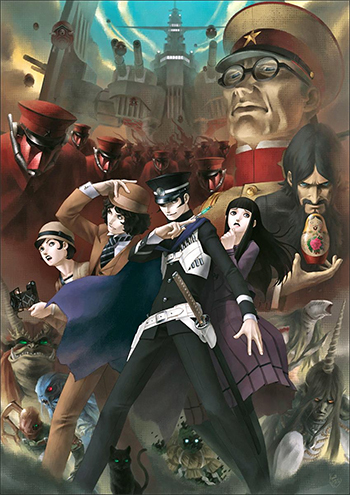 Set in The Roaring '20s (or the in-game description "Taisho 20"; note that the Taisho period didn't last that long), you play as a young man who has recently ascended from a summoner-in-training to a fully recognised Devil Summoner, inheriting the name and title of "Raidou Kuzunoha". The Kuzunoha Clan has been protecting the Capital of Japan for centuries, guided by the Herald of Yatagarasu. As Devil Summoners, they are trained to interact with the demons that live in the Dark Realm, a mirror of the real world where demons roam freely. Along with basic combat training, Devil Summoners can subjugate these monsters as familiars and use their powers in battle or daily life.

The main character, now known as Raidou Kuzunoha XIV, is assigned to the Capital under the care of a detective named Shouhei Narumi. One day, their detective agency receives a urgent plea for help from a troubled girl called Kaya. She begs for Raidou to kill her, only to be suddenly swiped off the streets by a troop of odd soldiers in red uniforms. Raidou must now track down Kaya and uncover the mystery behind her request before a terrible disaster befalls Japan.

The Devil Summoner series is notable for being a good bit more light-hearted than most other Shin Megami Tensei games, with numerous funny dialogues and comical scenes. Raidou retains the use of Random Encounters, but sets itself apart from the other games in the Megaten series by featuring a real-time battle system. Raidou can hold his own with a katana, but can also summon one demonic ally to help him. In another deviation from the Megaten norm, you no longer talk to demons to convince them to join your party, but rather you capture them by hitting their weak point and then forcing them into a tube. The same demon fusion system that has been featured since Nocturne remains here. When not battling, you attempt to solve the mysteries brought to the attention of the Narumi Detective Agency; in an interesting twist, you can use your demons to invoke specific emotions within the people you question. For example, invoking "Anger" may cause someone to rashly blurt out a clue that they had been withholding.

A direct sequel, Raidou Kuzunoha vs. King Abaddon (originally Devil Summoner: Kuzunoha Raidou tai Abaddon Ou), was first released in Japan on October 2008, before being shipped to the US on May 12, 2009. No PAL release dates were announced.

On April 1, 2014, Raidou Kuzunoha vs. the Soulless Army became available on the Playstation Network. Anyone who's missed out on this game can now enjoy it at their leisure.