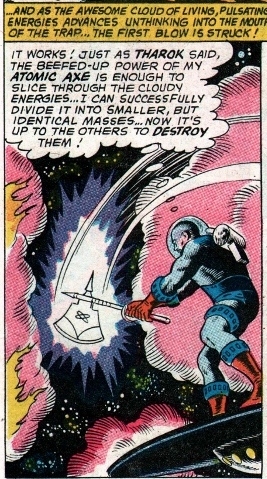 The Atomic Axe! It slices! It dices! It cuts through energy! (Even the tough, cloudy variety!)
Advertisement:

Cutting through energy is when a character uses Implausible Fencing Powers to slice through Pure Energy. Whether that means stabbing through Deflector Shields, parrying a Kamehame Hadoken, or being able to harm Energy Beings, this trope applies whenever someone is able to cut through something that should be insubstantial like it was a physical object.

Successfully cutting energy usually requires Implausible Fencing Powers, but may be at least partially Justified by using an Applied Phlebotinum weapon like a Soul-Cutting Blade or a Laser Blade — a blade of Pure Energy can presumably cut through other things made of Pure Energy because it Takes One to Kill One. Still, expect this trope to be restricted to the Master Swordsman — and with truly absurd amounts of skill, they'll be able to pull it off even with completely blunt equipment. Combat Clairvoyance is often used in place of (or in addition to) pure skill with a blade, as well — it's easier to put your sword exactly where it needs to be (to hit a resonance point in the energy matrix, or something) if you can see where it needs to be a few seconds in advance.

See also Parrying Bullets for deflecting projectiles (energy or material) with melee weapons, and Beam-O-War for defeating an energy attack with another energy attack.

Polnareff demonstrates the power of his Silver Chariot.

Polnareff demonstrates the power of his Silver Chariot.