Both Order and Chaos are Dangerous 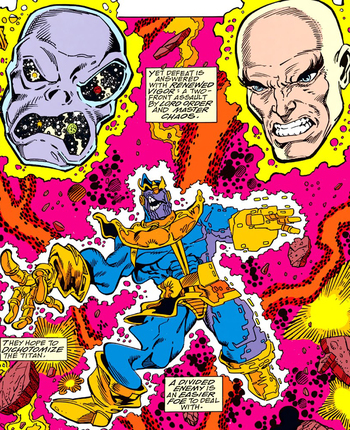 Order Versus Chaos is used as an alternative to good vs evil but oftentimes it gets simplified to Chaos Is Evil. In this case, Order Is Not Good either. Where Chaos has Bomb-Throwing Anarchists, Order has the Knight Templar. That's not to say that there are no good people on either side - but this trope is in effect whenever a good number of either sides are taking their "order" and "chaos" way too far. In this case, the work may present a third option in the form of Balance Between Order And Chaos.

The creators can present the two sides of the conflict as Dramatically Missing the Point, and the Good thing is to Take a Third Option, by balancing the two extremes. Too much "order" would result in a static and unchanging world. Too much "chaos" would destroy it.

This works out similar to Balance Between Good and Evil but with a crucial distinction. Namely, Good comes from the balance between the agents advocating conformity and the agents advocating individual choice, rather than some unspecified meaning of "balance". Creators can now use a Morality Kitchen Sink of characters in the conflict, as both sides believe their side is morally correct behaviour. Due to this, the story often is classified as Grey-and-Gray Morality.