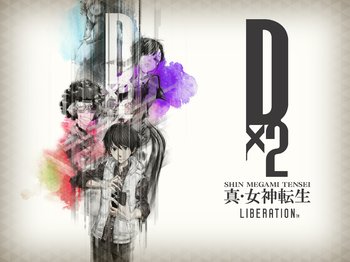 "I'm gonna break you down, I'm gonna steal your soul. I'm gonna burn you to flames, until you feel my pain!"
Advertisement:

One day like any other, you find yourself walking down the streets of Akihabara, lonely, apathetic, and aimless. Your call for anything exciting to happen is swiftly answered by a mysterious app appearing on your phone, introducing you to an all-too-exciting hidden underworld of demon summoners called Devil Downloaders. Quickly, you are recruited into a group of Dx2, short-form for Devil Downloader, called the Liberators and brought into the midst of an on-going feud against the Acolytes, a conflict that holds the fate of the world in its balance.

Released in Japan on January 22, 2018 and worldwide on July 24, 2018, SHIN MEGAMI TENSEI Liberation: Dx2 is a free-to-play spin-off mobile game adaption of Atlus's notoriously hardcore, demon-summoning Shin Megami Tensei series. Taking place in an Urban Fantasy setting that hearkens back to the same series's Devil Survivor spin-off, this adaptation notably attempts to cram features from many different Shin Megami Tensei adaptations into one game, acting as sort of celebration of the series.