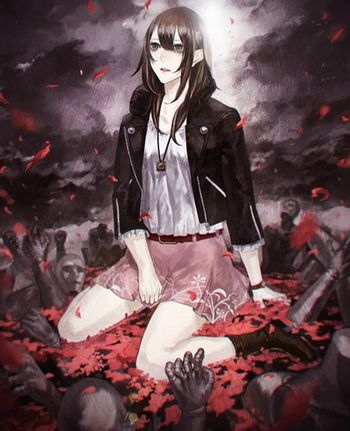 Welcome back to the realm of madness.
"Even though [urban legends] are suppose to be unscientific and sheer nonsense, why are people still constantly intrigued?"
-From the intro of the Blind Man arc.
Advertisement:

A tie-in novel titled Shin Hayarigami ~File Zero: Tokoyami no Maria (真 流行り神 〜ファイル0 常闇のマリア〜 - True Sudden Popular God ~ File Zero: Maria's Eternal Darkness ~) was published by Hifumi on December 5, 2014. Like the game itself, it's not available outside of Asia.

It's the first Hayarigami game to be released without any numbers on the title, since the production team mentioned that they want the game to serve as a fresh start for players who want to play it, but are unfamiliar with the franchise at all. So don't expect any form of Continuity Nod. Several elements returns from the main trilogy, such as "Inference Logic", "Self-Question" and "Courage Points", while the new game mechanic making its debut is "Liar's Art". It allows players to question suspects, witnesses and persons of interest in order to determine how a case can proceed with any answer that they give.

The game takes place in a fictional, but unnamed prefecture (known as Prefecture S) and village (known as Village C) where players take on the role of Saki Hojo, a female police officer who has been with the force for a few months after graduating from the local police academy. Blind Man, a Serial Killer from urban myth, has been deemed a suspect for killing people in the prefecture by taking their eyes and tongues out. Due to this problem, the National Police Agency has brought in Sojiro Sekimoto, an ex-university occultist professor who was arrested in 2012 for being involved in the death of a university student under his watch. Thanks to a distant relative in the Public Prosecutor's Office note He didn't ask for it, though., he was placed in the custody of the S Prefectural Police. Sekimoto and Saki team up, relying on the former's expertise to determine if Blind Man is someone trying to take advantage of the urban myth or if the paranormal really is starting to get involved. But the Blind Man case isn't the only one Saki and the police need to investigate.

From there on, the duo would need to investigate other cases that may or may not tie to various urban legends.

Because of the multiple story paths that can diverge over time, not all of the tropes mentioned are canon.

There's a finished Let's Play of the game

with GirlGamerGab playing it and later translating the Japanese subtitles to English with some help. Do note that what she translates while playing it may conflict with the subs since she's playing without any prior knowledge at first before the videos gets edited and uploaded to the internet.

The game's six chapters are being released in Japan as smartphone episode games for iOS and Google Play for those who have Japanese accounts only. An English release for iOS and Google Play was also made available on the 15th of March, 2018, locailized by I-Play from South Korea. Their social media rep that they're looking at 10K downloads before they would start to localize the other chapters. As of 2019, they announced that all translation for the other chapters are on hiatus as they wanted to monitor all reviews and reaction from non-Japanese gamers. However, the app is taken offline as of 2020.

The game is followed by a sequel, Shin Hayarigami 2. Saki returns as the main protagonist. GirlGamerGab has once again returned to translate it, and thankfully, that too is finished