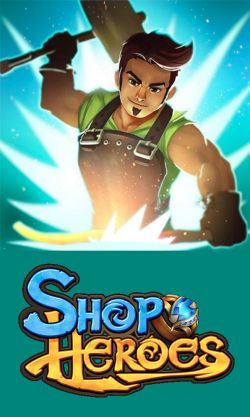 Shop Heroes is a game in which players run a shop catering to Dungeon Crawling heroes.
Advertisement:

The main component of gameplay is making and selling items, which include weapons, armour, potions, and other traditional adventuring equipment. This requires resources, facilities, and employees. As you craft things, you discover new blueprints for more advanced items. At the same time, you can task the heroes who frequent your establishment with missions to fetch rarer resources — this, of course, requires that you outfit them with sufficiently good gear to accomplish the task. To attract and train both staff and heroes, you also have to invest in the town around you (and it's possible for one town to have multiple players running shops, enabling cooperative investment). There's also a mode where you can pit a team of heroes against those of another player.

The game is free to play, with optional Microtransactions to acquire one of the in-game currencies or special features (the former can be obtained through normal gameplay; the latter not necessarily). The game is available on phones (Android and iPhone) and PC (Steam, Kongregate, and Facebook). The developer is Cloudcade, based in San Francisco and Quebec.