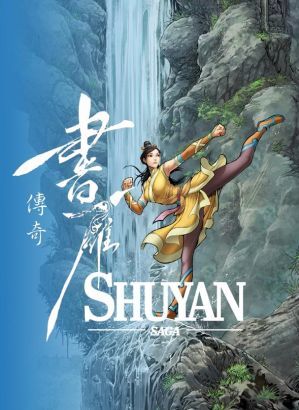 Shuyan Saga is a Wuxia-themed 3D Beat 'em Up game. Its story is presented in a Motion Comic format with art direction by Chinese comic artist Daxiong, and includes Visual Novel-style choices. It was developed by Lofty Sky Entertainment, and released in 2017 for PC through Steam, iOS, and Android.
Advertisement:

The game is set in a fantasy version of China called the Five Kingdoms. The title character, Shuyan (who is voiced by Kristin Kreuk), is a princess of the kingdom of Nan Feng, but avoids her official duties and studies martial arts instead. When an invading tyrant starts conquering the kingdoms one by one, Shuyan has to take a leading role in defending Nan Feng and its people. This requires her to master not only kung fu, but also the mystical powers she inherits as Nan Feng's princess.