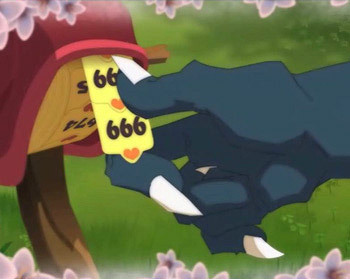 This... cannot end well.
"Fine, take this number. Let me be clear: your turn will come up long after the wind erodes the boulders down to sand."
— Charon, Shin Megami Tensei IV, queueing up a freshly-killed Player Character for the afterlife
Advertisement:

When a facility must serve large volumes of waiting customers, they will implement a system where arriving visitors take a numbered ticket from a dispenser to determine the order they will be served in. This eliminates the need for them to physically stand in a queue for long periods of time. An agent will call out the numbers to be served sequentially.

Many gags can ensue, such as the number taken by the guest being insanely far away from the number currently being served. Inversely, the waiting room might be empty, but the bureaucratic employees may still insist on calling each number in between individually. Out of desperation, the character might try to steal a lower-numbered ticket.

By the time the character's number is called, expect the office to be closed for the day.

A common part of this gag is there being a bureaucratic number-system at all at that place (for example, in heaven).

Can also be used as a Stock Phrase to tell someone that they are far from the only one who has a particular request or complaint.

A related trope is Ticket-Line Campout, which is about showing up early to guarantee an early spot in the queue (numbered or otherwise.) Sub trope of Absurdly Long Wait.