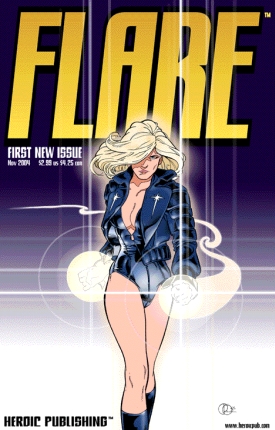 Flare is the flagship heroine of Heroic Publishing, an independent comic book publisher in the United States. Her comics were published irregularly from 1988 to 1994, and from 2004 to 2007. Billed as "Comics' Glittering Goddess of Light", Flare is also the glamorous fashion model Teresa Feran. She makes no attempt at a secret identity.

According to her Back Story, Flare is the daughter of a valkyrie who fought on the wrong side in World War II. Her allies include Donnah Hannah, alias Lady Arcane, and J.K. Clark, alias the Galloping Galooper. Flare's official site

features a gallery of covers and pin-up art. She later had a Sunday-only comic strip, distributed by Creators Syndicate.