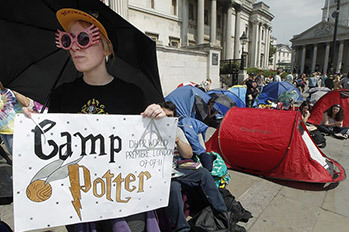 Fanatic geeks and where to find them.
Advertisement:

Comedic trope, often found in geekish media, wherein a character, driven by the desire to make sure he sees a movie or band, or purchase a product on its release date, camps out at the location selling them. Often subverted by the character doing so ridiculously early, doing it specifically for the publicity, or for something that he would likely have no problem whatsoever purchasing.

Very much Truth in Television, though with the advent of online pre-purchasing, it is slowly becoming a Dead Horse Trope, at least in the sense of buying tickets. After all, most entertainment companies prefer to lock in whatever revenue they can as soon as possible (especially before possibly negative reviews come in). Product releases and Black Friday sales are another matter, especially when it comes to game consoles.

Subtrope to Right on Queue.