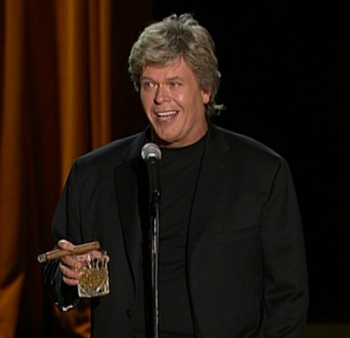 You can't fix stupid.
There's one advantage when you only fuck your wife, and you probably haven't thought about this. You can't get caught. You won't have some guy kick in your door and say, "You dirty motherfucker, is that your old lady?"
Actually, we did get caught once, me and my wife were having sex, when the housekeeper walked in on us. Which is a lot better than the reverse. When that happens, you wind up saying stuff like, "I'll pack my shit... as soon as it quits burning."
Advertisement:

Ronald Dee "Tater Salad" White (born December 18, 1956) is a stand-up comedian. He first gained fame in the early 2000s as a member of the Blue Collar Comedy Tour, in association with fellow comedians Bill Engvall, Jeff Foxworthy and Larry the Cable Guy. He is easily the most vulgar of the four, with his albums regularly carrying "explicit content" warnings. He's arguably the least "blue collar" of the four as well, as partially evidenced by love of fine whiskey and tequila, his explicit snarky humour (especially in recent years), and frequent appearances in stand-up events and films without the rest of his tourmates.

White's first major comedy album, Drunk in Public, was a commercial success, going gold in the wake of the Blue Collar tour's peak of success. One of his most notable jokes is a long "Shaggy Dog" Story wherein he is arrested for public intoxication.

In 2022, he announced his retirement from stand-up comedy.

Ron and his comedy provide examples of the following: