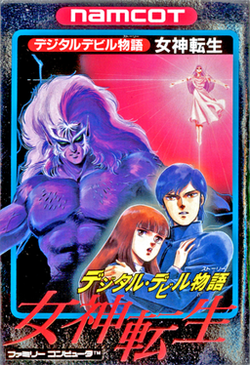 while a translation of Megami Tensei: The Old Testament was finished and released by the Romhacking Aerie

After the events of Digital Devil Story 2: Warrior of the Demon City, the programming genius Akemi Nakajima who first invented the Demon Summoning Program and his friend Yumiko Shirasagi, a reincarnation of the goddess Izanami, learn that a mysterious labyrinth has appeared in Asuka. The demon lord Lucifer has resurrected Nakajima and Yumiko's old enemies, Loki and Set; has imprisoned the goddess Izanami; and demons are again threatening to invade the human world. Nakajima and Yumiko must delve into the labyrinth and its six regions, free Izanami, and defeat Lucifer and the five Tyrants, including Set and Loki.

Something of an oddball in the franchise despite being the game that started it all, Digital Devil Story: Megami Tensei tends to be overshadowed by Shin Megami Tensei I. No doubt this is at least partially because it still is heavily connected to the franchise's roots in the Digital Devil Story novel series, and has very little to do with the post-apocalyptic, order versus chaos themes that would come to define the franchise. Also its continuity has been "dead" for some time, and indeed the game barely has any continuity links with its own immediate sequel, Megami Tensei II, much less later installments.

The game itself is an old-school 3D Nintendo Hard dungeon crawler with no overworld and very little plot and was very much influenced by the Western RPGs of the time. The 1995 updated version smoothed out some of the rough edges, like by importing the auto-mapping system of the 16-bit era Shin Megami Tensei series. Finally, it's the plot of this game and the novels it follows, specifically the detail that Yumiko Shirasagi is the reincarnation of a goddess, that explains the franchise's famous Artifact Title.