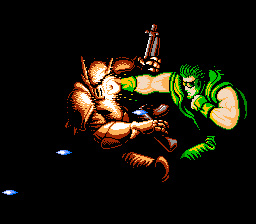 Face his fists of justice!
Advertisement:

In 2030, the world is threatened by the forces of Metal Command. Steve Hermann loses his hands in an accident, and gets them replaced with cyborg hands. He decides this is enough to take on this evil group and save the world.

Shatterhand is a side-scrolling action game in which the player not only has punching as the primary attack, but also robot drones as secondary attacks, with what kind of robot being decided by how you pick up certain power ups.

The game was developed by Natsume and released in 1991 for NES. It is also notable by being redone as a Licensed Game in Japan, of Tokkyuu Shirei Solbrain, even though Shatterhand started out as an original game.