Web Animation / Adventures of the Puffincat 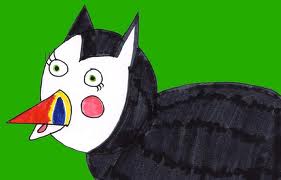 Meh.
Once there was the sailors, of the Soviet,
and one day they decided that they wants another pet!
Daddy was the puffins, Mommy was the cat,
and when they puts together makes the Puffincat!
Advertisement:

is self-explanatory. Puffincat is the main character, who is half-puffin and half-cat. He lives on a ship with Soviet sailors, and has adventures.

The series mostly makes use of Russian stereotypes and spoof aesops for humor, and has a decent following on the internet. There are currently six episodes available for watching, and it's unknown whether or not there will be more.

Adventures of the Puffincat provides examples of: