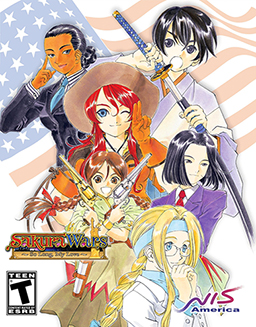 Sakura Wars V: So Long, My Love is the fifth main installment of Sega's Sakura Wars series and the only one on the PlayStation 2 and the Nintendo Wii (as well as the first to be officially released in English). This is also the final entry to feature character art and cutscene animation by Production I.G, joined this time around by AIC.

Picking up one year after the events of Sakura Wars 4: Fall in Love, Maidens, Navy Lieutenant Shinjiro Taiga, an in-training samurai from Tokyo, is summoned to New York to join the New York Combat Revue Star Division, a squad of vigilantes who, behind the disguise of a musical troupe, use their Transforming Mecha to protect New York from the threat of mysterious invading robots animated by a force known as "Dark Pneuma". The game focuses on Shinjiro acquainting himself with his new home, opening up to his teammates, and leading the Star Division against the Dark Pneuma's forces. Fighting by his side are Texan samurai Gemini Sunrise, Harlemite gangster-turned-lawyer Cheiron Archernote Sagitta Weinberg in the original Japanese, kind-hearted nurse Diana Caprice, Mexican bounty huntress Rosita Ariesnote Rikarita Aries in the original Japanese, and androgynous savant Subaru Kujo.

Like the rest of the series, So Long, My Love is split between visual novel and turn-based strategy, where the actions in the former will affect the performances of each character in the latter.

So Long, My Love was the final main Sakura Wars game to be co-developed by Red Entertainment before their co-ownership rights were bought by Sega in 2017. It was also the final game to feature Satoru Akahori as the scenario writer, Ohji Hiroi as the general producer, and Kosuke Fujishima and Hidenori Matsubara as the character designers.

The game is followed chronologically by Sakura Wars New York NY, Sakura Wars Because You Were There, Shin Sakura Taisen the Novel: Hizakura no Koro and Sakura Wars (2019). Sakura Wars V: Episode 0 ~Samurai Daughter of the Wild~ functions as a prequel to Gemini Sunrise's situation in the game.