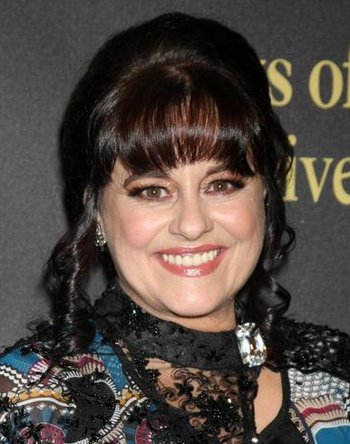 Debra Philece Sampler (July 16, 1953 - July 1, 2021) was an American voice actress and television actress, whose credits included various characters in anime. She also went by the aliases of Sue Beth Arden, Victoria Pryne, and Debra Cunningham. After starting out in small roles in films, she would star on the serial Days of Our Lives and the soap opera Another World.
Advertisement:

Philece's vocal range was one of the best among voice actors: She demonstrated the ability to play male roles (Cody/Iori Hida from Digimon Adventure 02), Old Women roles (Tiptory in Eureka Seven), as well as being able to use her normal voice in many many roles.

Other well-known roles from her include Mimi Tachikawa in Digimon Adventure, Alice McCoy in Digimon Tamers, Nanami in Digimon Data Squad, Hiyori Tamura in Lucky Star, Makimachi Misao in Rurouni Kenshin, Haré in Haré+Guu, Beauty in Bobobo-bo Bo-bobo, and Taokaka in BlazBlue.

One last question, Ms. Sampler. What is yaoi?
*Gasp!!!!* T... that depends on what you're talking about!