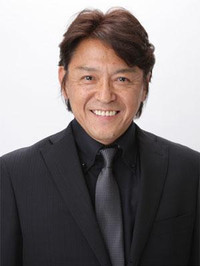 Naoya Uchida is a male seiyū, actor, and singer born on May 1, 1953 in Tokyo. He has played several minor roles of authority in various TV dramas. He debuted in 1972 to the NHK Maboroshi no Satsui and continued acting in theater and TV dramas until the late 90's. Since then, he has refocused his career on vocal performances such as opera and dubbing. He currently works for Remax.

His roles are usually the Aloof Big Brother or the Big Bad.