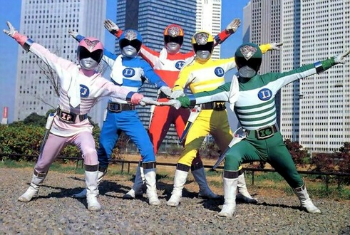 Denshi Sentai Denziman (Electro-Squadron Denzimannote "Denzi" is an alternate romanization for "Denji" which is a Japanese word for "electromagnetism", but it's mainly a reference to the planet where the team's technology comes from.) was the fourth Super Sentai series, lasting from 1980-1981. It was the first Sentai series where the rangers wore the trademark black visors.

The evil Vader Clan, led by Queen Hedrian, decides to refit Earth to suit their twisted ideals of beauty. And for Vader, that involves sending their minions to pollute the world. They had previously laid waste to another planet, Denzi Star 3,000 years ago. Now, IC the Denzidog, a survivor of Denzi Star, awakens to recruit five young people from all walks of life to gain the powers of the only force that can fight Vader: the Denzimen!