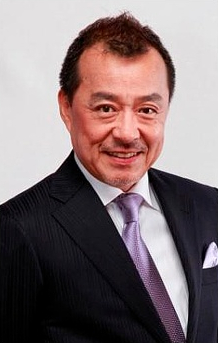 This is not even my final form.
Another great candidate of villain voices, second to only Norio Wakamoto. Despite his high pitched, wry voice and versatile acting skills... Ryūsei Nakao (born Tomoharu Takeo, February 5, 1951) tends to be cast as someone who has the label of pure evil in Boldface. Most of his characters tends to be extremely sadistic, cunning and scheming, mostly on the intelligence side.
Advertisement:

His three most infamous roles: Frieza of Dragon Ball Z, Mayuri Kurotsuchi of Bleach and Caesar Clown of One Piece pretty much sums up the quality of his main forte roles. But... we did say he is a versatile actor, right? In fact, when it comes to Western Animation dubs, he tends to play the heroes/protagonists (mostly the trickster ones, but still)

But then again, considering his reputation for being a charming gentleman and ladies' man with a sweet and gentle (you read that right) singing voice....

Appeared as a guest in Denshi Sentai Denziman, where he got to sing a disco number. Then, he went on to voice the Big Bad of Tokusou Sentai Dekaranger then the Evil Genius for Shuriken Sentai Ninninger.

Zarbon-san! Dodoria-san! Look! What beautiful fireworks!
Nah, on second thought, these fireworks are irritating the hell out of me. *points finger* Heh heh heh... This article's life ends 30 minutes from now.