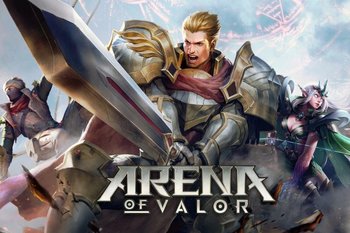 Tencent Games has gotten its own success story in creating Honor of Kings. They also had plans to release it internationally, but there's one problem: Honor of Kings has an overly Chinese feel, it might not click well with the international players that might not know Chinese history as much as Chinese people.

Their solution is to create a twin game that will never be released in mainland China to not disrupt Honor of Kings, but released everywhere else, with different designs that probably cater more to international fans, from the gritty Western designs (it helps that around the time, they received copyrights from the acquired Garena, who previously had acquired the rights for S2 Games/Frostburn Studios which had a very Western-designed Heroes of Newerth) to some cutesy and beautiful ones that would cater well to non-mainland China, Japan or other Asian countries (only a few Chinese design remains). They had to decide for a new name too. First they tried Realm of Valor, but then changed it into Strike of Kings... but in the end, they settled with Arena of Valor.

Most of the general MOBA traits from Honor of Kings apply here as well.

The background takes place in a fictional world called Athanor where the place was very much chaotic and lawless, where demons under the Ravanor race, Maloch, rampage the world. Everything changed when a knight named Arthur stepped forth and swore to upheld justice and faith, attempting to bring peace to the land and defending mankind. He valiantly fought against the forces of Maloch, enough that the demons started fighting back. Eventually, a few centuries later, even if Arthur passed away, his legacy has been passed through generations. Arthur was succeeded by the knight Thane, who continued the battle against Maloch's endless horde and still leading and guiding humanity.

The people gathering under Arthur and Thane became known as The Valiant Order, defenders of humanity, while Maloch's demonic forces became known as The Fallen, where Maloch struck an alliance with the Succubus queen Veera. Aside of these two factions, there are two other big factions, the Temple of Light, a priestly order that worships the Goddess of Light Ilumia and yet might have ulterior motives, and The Forest of Shadows, protectors of nature led by the Elven Queen Tel'Annas, who fought against The Fallen in their own way.

All in all, Athanor is set as a place where the war between factions will shape its destiny. Of course, much like every other MOBA, these stories have no bearing within the game. Heck, eventually, Tencent decided to reboot the plot to flesh it out more with some faction changes, but generally it doesn't have a lot of bearings to the gameplay.

There are several Guest Fighter from varying places, as noted below.

Thanks to the analog-based control and the fast-paced nature of the game, Arena of Valor would eventually receive a port on Nintendo Switch, making it the first mobile MOBA to receive a console port. All things considered, Tencent's actions (along with the success of Honor of Kings) would finally convince Riot Games that there is potential in the mobile devices, that they eventually agreed to port their game into mobile, titled League of Legends: Wild Rift.

Arena of Valor provides examples of the following tropes: