The Armies of Heaven 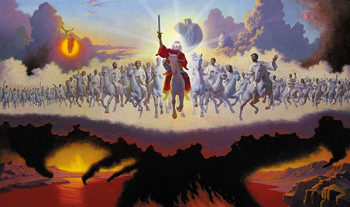 "Forgiveness is between sinners and God, and they're here to arrange the meeting."
The Lord thunders at the head of his army; his forces are beyond number, and mighty is the army that obeys his command...
— Joel 2:11, The Bible
Advertisement:

Our Angels Are Warriors. The Heavenly Host is organized as a rigid military structure to fight against the forces of evil in the name of God. With the big man being The Omnipotent, this tends to imply a Powers That Be or Have You Seen My God? portrayal that necessitates his servants to fight his battles for him.

The Legions of Hell are their enemy, and these soldiers will be the ones fighting on the front lines on Earth or to defend their home base when Hell Invades Heaven.

The Celestial Paragons and Archangels will be the ones in charge of the lower angels, with Archangel Michael typically as the field commander and the one to personally smite Satan.

The Good Counterpart to The Legions of Hell. See also Valkyries.

If his karma is good, Delsin's Video finisher allows him to reign angels upon his foes.

If his karma is good, Delsin's Video finisher allows him to reign angels upon his foes.