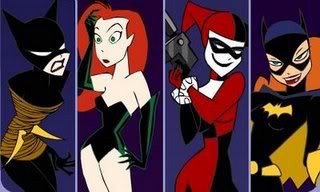 A 2000-2002 three-season web animation series of 30 short episodes made by Noodle Soup Productions for Warner Bros. Animation. It stars the female characters of the Gotham setting: Poison Ivy, Harley Quinn, Catwoman, and Batgirl, with occasional appearances by Zatanna and Renee Montoya. The series is notable for featuring the characters' television voice actresses and is generally considered canon with the DC Animated Universe.

The first twenty episodes (released monthly) were unrelated comedic interludes featuring tales of the daily life of the characters. The third season of ten episodes formed an interconnected arc concerning the disappearance of all men from Gotham City. Some installments featured an interactive element or a mini-game.

The fact that it was an online release allowed for much looser standard for content, albeit in a more "cartoonish" form. The Flash Animation (hailing as it did from the early days of the web) was not very fluid, but got better as time went on.

Until mid-2015, the episodes were still viewable on the Warner Bros. website (albeit hidden). You can now view the series on YouTube here

. The entire series was also included as Bonus Content on the Birds of Prey (2002) DVD. A spinoff, five-issue comic book was released for the series, and Paul Dini's "Harley and Ivy" mini-series and later Gotham City Sirens clearly took some inspiration from the premise.