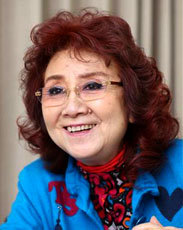 Masako Nozawa, a voice actress born October 25, 1936, is most famous as Son Goku (and all other males in Goku's family, except for Raditz), in the Dragon Ball franchise. She usually played the Adorably Precocious Child during most of her career. These days, she plays usually the Cool Old Lady or mother, though, as well as The Narrator...

But for the most part, it would be reprising Goku, the role that pretty much established herself as one of the legendary voice actors in the business. She has stated that she will continue to reprise Goku and family in any Dragon Ball media until her death (considering Dragon Ball's status, that is one hell of a ballsy move for someone her age). As a result of this she's earned two Guinness World Records: after the release of Dragon Ball Xenoverse 2, she was honored as the "voice actor who voiced the same character in a video game for the longest period" and "longest video game voice acting career." She was certified on October 25, 2016, at which point she had voiced Goku in Dragon Ball video games for 23 years and 218 days.

Nozawa set up her own talent agency, Office Nozawa, in 2006, and was married to fellow voice actor Masaaki Tsukada until his death in 2014.