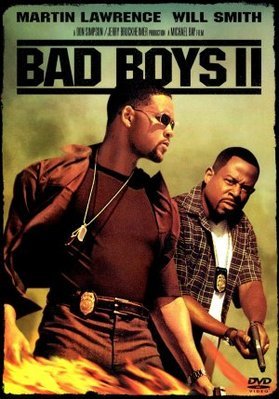 "Shit just got real."
"We ride together, we die together. Bad boys for life."
— Mike Lowrey
Advertisement:

Bad Boys II is a Buddy Cop action film and the sequel to Bad Boys, directed like the first by Michael Bay, with Will Smith and Martin Lawrence returning to their previous roles.

Miami is being flooded with ecstacy that's coming from Cuba through drug lord Johnny Tapia. Detectives Mike Lowrey and Marcus Burnett are on the case, and are determined to bring the man to justice. Additional drama is provided by friction with the DEA, which counts Marcus' younger sister Sydney among its agents, and from Marcus possibly transferring out of the department, leaving Mike without his longtime partner.

Followed by Bad Boys for Life, released in 2020.

carries dual Berettas on his drunken rampage through Tapia's house.