Film / Babe: Pig in the City 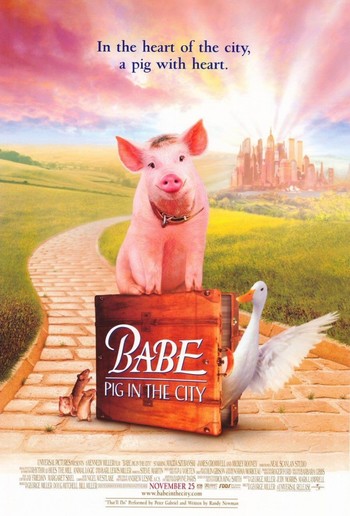 Babe: Pig in the City is a 1998 fantasy comedy-drama film directed by George Miller. It is a sequel to the film Babe.

Months have passed since the events of the first film, and Babe is beloved by everyone for his role as a "sheep-pig". One day, Babe accidentally injures Arthur while trying to help him with the well and Esme is left to do all the work on the farm in his place. Things get worse when debt collectors come to foreclose on the farm, but luckily, Esme finds out they can pay off their debt by making an appearance at a fair, so she and Babe go off on a business trip. However, circumstances cause them to miss their connecting flight and thus, they're forced to stay in the city until they can get back to the farm. But Babe and Esme soon find out that city life is much harder than farm life...

Despite its cutesy-poo title, Babe: Pig in the City manages to take an already fairly dark story and turn it Darker and Edgier. The fact that George Miller takes over as director (he produced the first film and Chris Noonan directed) has quite a bit to do with it. It has been called The City of Lost Children — Except This Time the Children are Adorable Kittens, which gives you an idea of the tone. Although at the same time it is much Denser and Wackier.